Is there a chance for SNeI1/2? 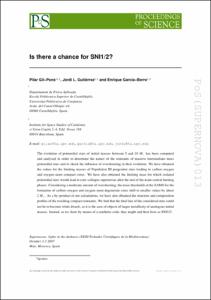 Except where otherwise noted, content on this work is licensed under a Creative Commons license : Attribution-NonCommercial-NoDerivs 3.0 Spain
Abstract
The evolution of primordial stars of initial masses between 5 and 10 M⊙ has been computed and analyzed in order to determine the nature of the remnants of massive intermediate–mass primordial stars and to check the influence of overshooting in their evolution. We have obtained the values for the limiting masses of Population III progenitor stars leading to carbon–oxygen and oxygen–neon compact cores. We have also obtained the limiting mass for which isolated primordial stars would lead to core–collapse supernovae after the end of the main central burning phases. Considering a moderate amount of overshooting, the mass thresholds at the ZAMS for the formation of carbon–oxygen and oxygen–neon degenerate cores shift to smaller values by about 2 M⊙. As a by–product of our calculations, we have also obtained the structure and composition profiles of the resulting compact remnants. We find that the final fate of the considered stars could not be to become white dwarfs, as it is the case of objects of larger metallicity of analogous initial masses. Instead, as we show by means of a synthetic code, they might end their lives as SNI1/2.
CitationGil Pons, P.; Gutierrez, J.; García-Berro, E. Is there a chance for primordial SNeI1/2?. "POS - Proceedings of science", Setembre 2007, vol. 13, p. 1-14.
URIhttp://hdl.handle.net/2117/8125
ISSN1824-8039
Publisher versionhttp://pos.sissa.it//archive/conferences/060/013/SUPERNOVA_013.pdf
Collections
Share: