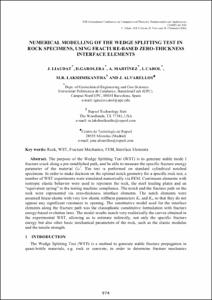 Lakashmikhanta, Ramasesha
Alvarellos, J.
Document typeConference lecture
PublisherCIMNE
Rights accessOpen Access
All rights reserved. This work is protected by the corresponding intellectual and industrial property rights. Without prejudice to any existing legal exemptions, reproduction, distribution, public communication or transformation of this work are prohibited without permission of the copyright holder
Abstract
The purpose of the Wedge Splitting Test (WST) is to generate stable mode I fracture crack along a pre-established path, and be able to measure the specific fracture energy parameter of the material GFI. The test is performed on standard cylindrical notched specimens. In order to make decision on the optimal notch geometry for a specific rock test, a number of WST experiments were simulated numerically via FEM. Continuum elements with isotropic elastic behavior were used to represent the rock, the steel loading plates and an “equivalent spring” to the testing machine compliance. The notch and the fracture path on the rock were represented via zero-thickness interface elements. The notch elements were assumed linear elastic with very low elastic stiffness parameters Kn and Kt, so that they do not oppose any significant resistance to opening. The constitutive model used for the interface elements along the fracture path was the elastoplastic constitutive formulation with fracture energy-based evolution laws. The model results match very realistically the curves obtained in the experimental WST, allowing us to estimate indirectly, not only the specific fracture energy but also other basic mechanical parameters of the rock, such as the elastic modulus and the tensile strength.
CitationLiaudat, Joaquín [et al.]. Numerical modelling of the wedge splitting test in rock specimens, using fracture-based zero-thickness interface elements. A: COMPLAS XIII. "COMPLAS XIII : proceedings of the XIII International Conference on Computational Plasticity : fundamentals and applications". CIMNE ed. Barcelona: CIMNE, 2015, p. 974-981.
URIhttp://hdl.handle.net/2117/81239
ISBN978-84-944244-6-5
Collections
Share: