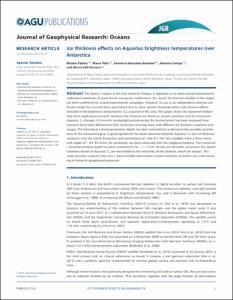 Document typeArticle
Rights accessOpen Access
Abstract
The Dome-C region, in the East Antarctic Plateau, is regarded as an ideal natural laboratory for calibration/validation of space-borne microwave radiometers. At L-band, the thermal stability of this region has been confirmed by several experimental campaigns. However, its use as an independent external calibration target has recently been questioned due to some spatial inhomogeneities and seasonal effects revealed in the brightness temperatures (T-B) acquired in this area. This paper shows the observed relationship, from exploratory research, between the Antarctic ice thickness spatial variations and the measured Aquarius T-B changes. A 3-months no-daylight period during the Austral winter has been analyzed. Four transects have been defined over East Antarctica covering areas with different ice thickness variations and ranges. The theoretical L-band penetration depth has been estimated to understand the possible contributions to the measured signal. A good agreement has been observed between Aquarius T-B and ice thickness variations over the whole Antarctica, with correlations of approximate to 0.6-0.7. The two variables show a linear trend with slopes of approximate to 8.3-9.5 K/km. No correlation has been observed with the subglacial bedrock. The maximum L-band penetration depth has been estimated to be approximate to 1-1.5 km. Results are therefore consistent: the spatial variations found on Aquarius T-B are not related to the emissivity of the bedrock, which lies deeper. This study provides evidence that new L-band satellite observations could contribute to further our understanding of Antarctic geophysical processes.
CitationPablos, M., Piles, M., Gonzalez, V., Camps, A., Vall-llossera, M. Ice thickness effects on Aquarius brightness temperatures over Antarctica. "Journal of geophysical research-oceans", 01 Abril 2015, vol. 120, núm. 4, p. 2856-2868.
URIhttp://hdl.handle.net/2117/81149
DOI10.1002/2014JC010151
ISSN2169-9275
Collections
Share: