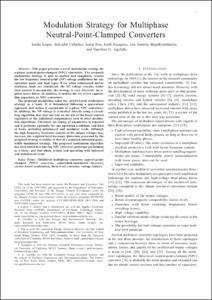 This paper presents a novel modulation strategy for n-phase neutral-point-clamped (NPC) converters. The proposed modulation strategy is able to control and completely remove the low-frequency neutral-point (NP) voltage oscillations for any operation point and load types. Even when unbalanced and/or nonlinear loads are considered, the NP voltage remains under total control. Consequently, the strategy is very attractive for n-phase active filters. In addition, it enables the use of low-capacity film capacitors in NPC converters. The proposed modulation takes the carrier-based modulation strategy as a basis. It is formulated following a generalized approach that makes it expandable to n-phase NPC converters. In addition, the NP voltage is controlled directly using a closed-loop algorithm that does not rely on the use of the linear control regulators or the additional compensators used in other modulation algorithms. Therefore, no tuning of parameters is required and it performs optimally for any operating conditions and kind of loads, including unbalanced and nonlinear loads. Although the high-frequency harmonic content of the output voltages may increase, the weighted total harmonic distortion generated by the proposed strategy is similar to that of a standard sinusoidal pulse width modulated strategy. The proposed modulation algorithm has been tested in a four-leg NPC converter prototype performing as a three-and four-phase system and operating with balanced and unbalanced loads.
CitationLópez, I., Ceballos, S., Pou, J., Zaragoza, J., Andreu, J., Kortabarria, I., Agelidis, V. Modulation strategy for multiphase neutral-point-clamped converters. "IEEE transactions on power electronics", 01 Febrer 2015, vol. 31, núm. 2, p. 928-941.
URIhttp://hdl.handle.net/2117/81102
DOI10.1109/TPEL.2015.2416911
ISSN0885-8993