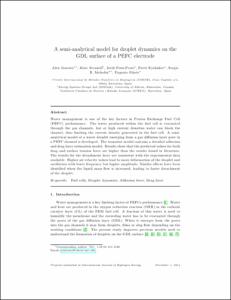 Document typeArticle
Rights accessOpen Access
Abstract
Water management is one of the key factors in Proton Exchange Fuel Cell (PEFC) performance. The water produced within the fuel cell is evacuated through the gas channels, but at high current densities water can block the channel, thus limiting the current density generated in the fuel cell. A semi-analytical model of a water droplet emerging from a gas diffusion layer pore in a PEFC channel is developed. The transient model contains a detailed adhesion and drag force estimation model. Results show that the predicted values for both drag and surface tension force are higher than the results found in literature. The results for the detachment force are consistent with the experimental data available. Higher air velocity values lead to more deformation of the droplet and oscillation with lower frequency but higher amplitude. Similar effects have been identified when the liquid mass flow is increased, leading to faster detachment of the droplet.
CitationJarauta, À., Secanell, M., Pons, J., Ryzhakov, P., Idelsohn, S.R., Oñate, E. A semi-analytical model for droplet dynamics on the GDL surface of a PEFC electrode. "International journal of hydrogen energy", Abril 2015, vol. 40, núm. 15, p. 5375-5383.
URIhttp://hdl.handle.net/2117/81093
DOI10.1016/j.ijhydene.2015.01.058
ISSN0360-3199
Publisher versionhttp://www.sciencedirect.com/science/article/pii/S036031991500097X
Collections
Share: