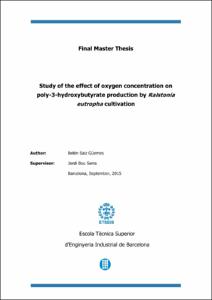 Different oxygen saturation concentrations were tested for Ralstonia eutropha cultivation to study its effect on microbial growth, polymer production and polymer molecular weight. The cell in the culture medium was measured by spectrophotometry, and PHB concentration and molecular weight were measured by Gel Permeation Chromatography (GPC). Ralstonia eutropha CECT 4635 strain was used for the batch process production of poly(3-hydroxybutyrate) (PHB) in a 1-L fermentor. Glucose was used as a carbon source and PHB accumulation was induced by nitrogen limitation, so NaOH solution was used for pH control. Using an oxygen concentration of 65%, the 48 hours-batch cultivation resulted in a final cell concentration of 9,43 g/l, a PHB concentration of 9,45 g/l and a PHB productivity of 0,20 g/l·h. These values are 50 times higher than the ones obtained when using air at the same conditions. The molecular weight of the final polymer was 54.000 Da. Results suggested, though, that the nitrogen limitation had just started when terminating the fermentation, what justifies such low values. Nevertheless, PHB content, cell yield from glucose and PHB yield from glucose when using 65% oxygen saturation were the highest ever reported to date in R. eutropha cultivation, with values of 99,8%, 0,47 g/g and 0,47 g/g respectively.
SubjectsBiopolymers -- Microstructure, Microbial metabolism, Biopolímers -- Microestructura, Metabolisme microbià
URIhttp://hdl.handle.net/2117/81066