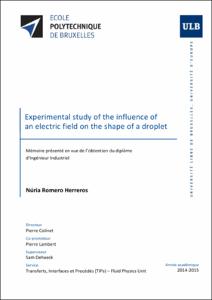 Except where otherwise noted, content on this work is licensed under a Creative Commons license : Attribution-NonCommercial-NoDerivs 3.0 Spain
Abstract
The electrowetting effect has emerged as an important research topic in recent years. Manipulation of droplets by electric fields has been extensively studied employing different setups, the most common being the configuration in which the electric field is created inside the droplet. However, such a configuration has been mostly employed using conductive liquids, whereas non-conductive droplets have been barely tested under the effect of an electric field using this setup. On the other hand, the influence of an electric field on the shape of a droplet has also been of considerable interest using an alternative configuration in which the electric field is applied between two electrodes with no contact with the drop – the Taylor cone configuration. However, the effects observed employing this last setup are rather different to those obtained using the aforementioned design. While the most important effect in those experiments in which the electric field is created inside the drop is the reduction of the contact angle, the main effect found using the second configuration is the droplet elongation in the electric field direction. In order to demonstrate if dielectric and almost perfectly wetting liquid droplets are affected in the same way as other fluids already tested, the effect of an electric field on the shape of an HFE-7500 droplet has been examined under two different experimental setups by means of interferometric techniques. For the setup where the internal electric field is created, no statistically relevant reduction was measured. Nevertheless, shape deviations have been found at a certain distance of the wire through which the electric field is applied. Moreover, the existence of such deviations depends strongly on the AC frequency. Regarding the second design, it should be mentioned that the initial parallel plate design was working correctly for water+salt droplets. However, no remarkable effects were observed applying strong electric fields of up to 10 kV/cm on HFE-7500 droplets. With the goal of increasing the field strength, two improvised configurations of a metal ring and a needle as a counter-electrodes have also been implemented. In these cases, a strong non-uniform electric field was created which did lead to shape changes of the droplets.
SubjectsDrops, Electric fields, Surfaces (Physics, Gotes, Camps elèctrics, Superfícies (Física)
DegreeMÀSTER UNIVERSITARI EN ENGINYERIA INDUSTRIAL (Pla 2014)
URIhttp://hdl.handle.net/2117/81012
Collections
Share: