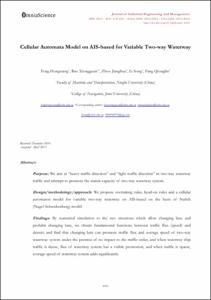 Except where otherwise noted, content on this work is licensed under a Creative Commons license : Attribution-NonCommercial 3.0 Generic
Abstract
Purpose: We aim at “heavy traffic direction” and “light traffic direction” in two-way waterway traffic and attempt to promote the transit capacity of two-way waterway system. Design/methodology/approach: We propose overtaking rules, head-on rules and a cellular automaton model for variable two-way waterway on AIS-based on the basis of NaSch (Nagel-Schreckenberg) model. Findings: By numerical simulation to the two situations which allow changing lane and prohibit changing lane, we obtain fundamental functions between traffic flux (speed) and density and find that changing lane can promote traffic flux and average speed of two-way waterway system under the premise of no impact to the traffic order, and when waterway ship traffic is dense, flux of waterway system has a visible promotion, and when traffic is sparse, average speed of waterway system adds significantly. Practical implications: As an implication, we can reach a compromise between traffic efficiency and safety. When no collision risk incurred, the marine administrations should allow involved ships to change lane for overtaking. Social implications: As a suggestion, Rule 9 and Rule 10 of COLREGs should make some adjustments correspondingly. Originality/value: The paper presents a method to analyze and promote transit capacity of two-way waterway.
CitationHongxiang, Feng [et al.]. Cellular automata model on AIS-based for variable two-way waterway. "Journal of Industrial Engineering and Management", Juliol 2015, vol. 8, núm. 3, p. 647-692.
URIhttp://hdl.handle.net/2117/80955
DLB-28744-2008
ISSN2013-0953
Collections
Share: