An accessible interface for programming an assistive robot 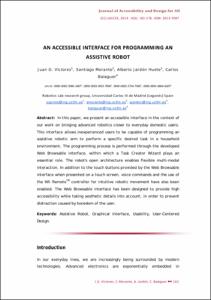 Except where otherwise noted, content on this work is licensed under a Creative Commons license : Attribution-NonCommercial-NoDerivs 3.0 Spain
Abstract
In this paper, we present an accessible interface in the context of our work on bringing advanced robotics closer to everyday domestic users. This interface allows inexperienced users to be capable of programming an assistive robotic arm to perform a specific desired task in a household environment. The programming process is performed through the developed Web Browsable interface, within which a Task Creator Wizard plays an essential role. The robot's open architecture enables flexible multi-modal interaction. In addition to the touch buttons provided by the Web Browsable interface when presented on a touch screen, voice commands and the use of the Wii RemoteTM controller for intuitive robotic movement have also been enabled. The Web Browsable interface has been designed to provide high accessibility while taking aesthetic details into account, in order to prevent distraction caused by boredom of the user.
CitationVictores, Juan G. [et al.]. An accessible interface for programming an assistive robot. "J", 2014, vol. 4, núm. 3, p. 161-176.
URIhttp://hdl.handle.net/2117/80929
ISSN2013-7087
Collections
Share: