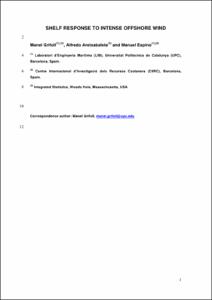 Cross and along-shelf winds drive cross-shelf transport that promotes the exchange of tracers and nutrients to the open sea. The shelf response to cross-shelf winds is studied in the north shelf of the Ebro Delta (Mediterranean Sea), where those winds are prevalent and intense. Offshore winds in the region exhibit strong intensities (wind stress larger than 0.8 Pa) during winter and fall. The monthly average flow observed in a 1 year current meter record at 43.5 m was polarized following the isobaths with the along-shelf variability being larger than the cross-shelf. Prevalent southwestward along-shelf flow was induced by the three-dimensional regional response to cross-shelf winds and the coastal constraint. Seaward near-surface velocities occurred predominantly during offshore wind events. During intense wind periods, the surface cross-shelf water transport exceeded the net along-shelf transport. During typically stratified seasons, the intense cross-shelf winds resulted in a well-defined two-layer flow and were more effective at driving offshore transport than during unstratified conditions. While transfer coefficients between wind and currents were generally around 1%, higher cross-shelf transfer coefficients were observed in the near-inertial band. The regional extent of the resulting surface cold water during energetic cross-shelf winds events was concentrated around the region of the wind jet. Cross-shelf transport due to along-shelf winds was only effective during northeast wind events. During along-shelf wind conditions, the transport was estimated to be between 10 and 50% of the theoretical Ekman transport.