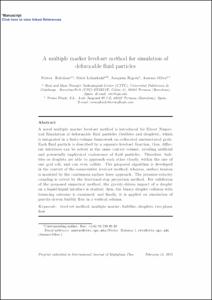 Except where otherwise noted, content on this work is licensed under a Creative Commons license : Attribution-NonCommercial-NoDerivs 3.0 Spain
Abstract
A novel multiple marker level-set method is introduced for Direct Numerical Simulation of deformable fluid particles (bubbles and droplets), which is integrated in a finite-volume framework on collocated unstructured grids. Each fluid particle is described by a separate level-set function, thus, different interfaces can be solved in the same control volume, avoiding artificial and potentially unphysical coalescence of fluid particles. Therefore, bubbles or droplets are able to approach each other closely, within the size of one grid cell, and can even collide. The proposed algorithm is developed in the context of the conservative level-set method, whereas, surface tension is modeled by the continuous surface force approach. The pressure-velocity coupling is solved by the fractional-step projection method. For validation of the proposed numerical method, the gravity-driven impact of a droplet on a liquid-liquid interface is studied; then, the binary droplet collision with bouncing outcome is examined, and finally, it is applied on simulation of gravity-driven bubbly flow in a vertical column.
CitationBalcazar, N., Lehmkuhl, O., Rigola, J., Oliva, A. A multiple marker level-set method for simulation of deformable fluid particles. "International journal of multiphase flow", 01 Setembre 2015, vol. 74, p. 125-142.
URIhttp://hdl.handle.net/2117/80876
DOI10.1016/j.ijmultiphaseflow.2015.04.009
ISSN0301-9322
Publisher versionhttp://www.sciencedirect.com/science/article/pii/S0301932215001019
Collections
Share: