Preferential incorporation of azelaic acid units into the crystalline phase of the copoly(alkylene dicarboxylate) derived from 1,9-nonanediol and an equimolar mixture of pimelic and azelaic acids 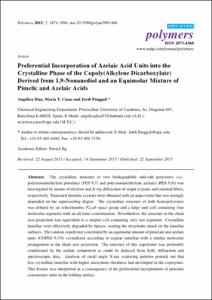 Document typeArticle
Rights accessOpen Access
Abstract
The crystalline structure of two biodegradable odd-odd polyesters (i.e., poly(nonamethylene pimelate) (PES 9,7) and poly(nonamethylene azelate) (PES 9,9)) was investigated by means of electron and X-ray diffraction of single crystals and oriented fibers, respectively. Truncated rhombic crystals were obtained with an aspect ratio that was strongly depended on the supercooling degree. The crystalline structure of both homopolyesters was defined by an orthorhombic P2(1)ab space group and a large unit cell containing four molecular segments with an all-trans conformation. Nevertheless, the structure in the chain axis projection was equivalent to a simpler cell containing only two segments. Crystalline lamellae were effectively degraded by lipases, starting the enzymatic attack on the lamellar surfaces. The random copolymer constituted by an equimolar amount of pimelate and azelate units (COPES 9,7/9) crystallized according to regular lamellae with a similar molecular arrangement in the chain axis projection. The structure of this copolymer was preferably conditioned by the azelate component as could be deduced from both, diffraction and spectroscopic data. Analysis of small angle X-ray scattering patterns pointed out that less crystalline lamellae with higher amorphous thickness had developed in the copolymer. This feature was interpreted as a consequence of the preferential incorporation of pimelate comonomer units in the folding surface.
CitationDiaz, A., Casas, M., Puiggali, J. Preferential incorporation of azelaic acid units into the crystalline phase of the copoly(alkylene dicarboxylate) derived from 1,9-nonanediol and an equimolar mixture of pimelic and azelaic acids. "Polymers", 01 Setembre 2015, vol. 7, núm. 9, p. 1871-1894.
URIhttp://hdl.handle.net/2117/80847
DOI10.3390/polym7091486
ISSN2073-4360
Publisher versionhttp://www.mdpi.com/2073-4360/7/9/1486
Collections
Share: