Gesture based HRI for industrial AGVs 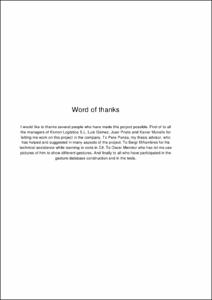 Interaction between humans and AGVs (Automatic guided vehicles) is often reduced to non-existent or just some pushbuttons, touchscreens or signalling lamps [17][18][19][20]. In recent years some researchers have attempted to improve the interaction through AGVs that follow people [53], path planning through gestures or robots that are able to ask for help if they cannot carry out a task on its own. [54] This project proposes extending the HRI (Human Robot Interaction) of Kivnon Logística's AGVs with gesture recognition and human localization through depth cameras and with emotion-simulating feedback through a screen. The aim for this technology introduction is to develop a shopping cart like AGV that follows people on gesture commands. The developed system will be built on Kivnon Logística's AGV model K11 mouse as a prototype. Later on a specific AGV will be designed. The final aim of this project is to introduce smart interactive AGVs in industrial environments focused in production areas.
SubjectsRobots -- Control systems, Automated guided vehicle systems, Human-machine systems, Intelligent control systems, Robots -- Sistemes de control, Sistemes de vehicles guiats automàticament, Sistemes persona-màquina, Sistemes de control intel·ligents
URIhttp://hdl.handle.net/2117/80832