A remarkable recurrent nova in M 31: The predicted 2014 outburst in X-rays with Swift 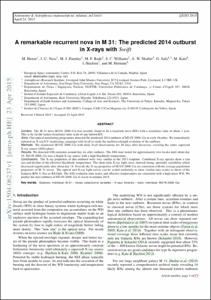 Kato, M.
Hachisu, I.
Hernanz Carbó, Margarita
Document typeArticle
Rights accessOpen Access
Abstract
Context. The M 31 nova M31N 2008-12a was recently found to be a recurrent nova (RN) with a recurrence time of about one year. This is by far the fastest recurrence time scale of any known RN.; Aims. Our optical monitoring programme detected the predicted 2014 outburst of M31N 2008-12a in early October. We immediately initiated an X-ray/UV monitoring campaign with Swift to study the multiwavelength evolution of the outburst.; Methods. We monitored M31N 2008-12a with daily Swift observations for 20 days after discovery, covering the entire supersoft X-ray source (SSS) phase.; Results. We detected SSS emission around day six after outburst. The SSS state lasted for approximately two weeks until about day 19. M31N 2008-12a was a bright X-ray source with a high blackbody temperature.; Conclusions. The X-ray properties of this outburst are very similar to the 2013 eruption. Combined X-ray spectra show a fast rise and decline of the effective blackbody temperature. The short-term X-ray light curve showed strong, aperiodic variability which decreased significantly after about day 14. Overall, the X-ray properties of M31N 2008-12a are consistent with the average population properties of M 31 novae. The optical and X-ray light curves can be scaled uniformly to show similar time scales to those of the Galactic RNe U Sco or RS Oph. The SSS evolution time scales and effective temperatures are consistent with a high-mass WD. We predict the next outburst of M31N 2008-12a to occur in Oct.-Dec. 2015.
CitationHenze, M., Ness, J., Darnley, M., Bode, M., Williams, S., Shafter, A., Sala, G., Kato, M., Hachisu, I., Hernanz, M. A remarkable recurrent nova in M 31: The predicted 2014 outburst in X-rays with Swift. "Astronomy and astrophysics", 01 Agost 2015, vol. 580, núm. A46.
URIhttp://hdl.handle.net/2117/80800
DOI10.1051/0004-6361/201526028
ISSN0004-6361
Collections
Share: