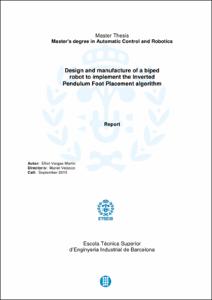 Show full item record
Vargas Matín, Elliot
Tutor / directorVelasco, Manel
Document typeMaster thesis
Rights accessOpen Access
Abstract
This project aims to design and manufacture a bipedal robot speci cally designed to be controlled with the Inverted Pendulum Foot Placement algorithm. This algorithm, models the robot as an inverted pendulum. This inverted pendulum is formed from the support points of the leg of the robot with the ground, to the center of gravity of the robot. Then using the kinetic and potential energy of the inverted pendulum, the correct position of the point that represent the center of gravity, is calculated so that the robot does not fall to the ground. The project includes the design and manufacture of the robot's electronics, mechanics and software. But not the implementation of the Inverted Pendulum Foot Placement algorithm although, a Test Algorithm will be created in order to test that all the mechanics, electronics and that the robot can be controlled by this type of algorithm. This robot is powered by lithium batteries and it uses six Dynamixel motors to move. The input signals are from an IMU (Inertial Measurement Unit) and the encoder inside the motors. All the electronics are controlled by a microcontroller, but the algorithm is implemented inside of a Microcomputer. Concerning the mechanics, the entire robot parts were designed in 3D models and printed using ABS plastic. There is a second design of the robot that is connected to a PC, as well as, to a power source in order to have in nite autonomy. Also a Stability Assistance has been made in order to help the algorithm development.
SubjectsRobots -- Design and construction, Algorithms, Automatic control, Robots -- Disseny i construcció, Algorismes, Control automàtic
URIhttp://hdl.handle.net/2117/80613
Collections
Share: