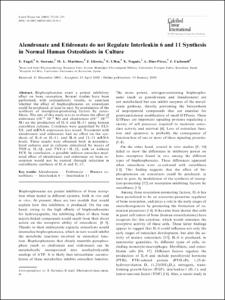 Serrano, Sergi
Mariñoso, Maria Lluïsa
Lloreta, Josep
Ulloa, Fausto
Nogués, Xavier
Díez-Pérez, Adolfo
Carbonell, Jordi
Document typeArticle
Rights accessOpen Access
Abstract
Bisphosphonates exert a potent inhibitory effect on bone resorption. Several studies have been performed, with contradictory results, to ascertain whether the effect of bisphosphonates on osteoclasts could be produced, at least in part, by modulation of the synthesis of resorption-promoting factors by osteoblasts. The aim of this study was to evaluate the effect of etidronate (10)4–10)9 M) and alendronate (10)7–10)12 M) on the production of IL-6 and IL-11 using human osteoblast cultures. Cytokines were quantified by ELISA, and mRNA expression was tested. Treatment with alendronate and etidronate had no effect on the synthesis of IL-6 or IL-11, and IL-6 and IL-11 mRNA levels. These results were obtained both in nonstimulated cultures and in cultures stimulated by means of TNF-a, IL-1b, and TNF-a+IL-1b, with or without FCS. In conclusion, a possible indirect osteoclast-mediated effect of alendronate and etidronate on bone resorption would not be exerted through reduction in osteoblastic synthesis of IL-6 and IL-11.
CitationEngel, E. [et al.]. Alendronate and etidronate do not regulate interleukin 6 and 11 synthesis in normal human osteoblasts in culture. "Calcified tissue international", 2003, vol. 72, núm. 3, p. 228-235.
URIhttp://hdl.handle.net/2117/8052
ISSN0171-967X
Collections
Share: