Usefulness of feedback in e-learning from the students’ perspective 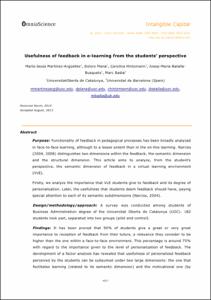 Show full item record
Martínez-Argüelles, María-Jesús
Plana, Dolors
Hintzmann, Carolina
Batalla-Busquets, Josep-Maria
Badia, Marc
Document typeArticle
PublisherOmniaScience
Rights accessOpen Access
Abstract
Purpose: Functionality of feedback in pedagogical processes has been broadly analyzed in face-to-face learning, although to a lesser extent than in the on-line learning. Narciss (2004, 2008) distinguishes two dimensions within the feedback, the semantic dimension and the structural dimension. This article aims to analyze, from the student’s perspective, the semantic dimension of feedback in a virtual learning environment (VLE). Firstly, we analyze the importance that VLE students give to feedback and its degree of personalization. Later, the usefulness that students deem feedback should have, paying special attention to each of its semantic subdimensions (Narciss, 2004). Design/methodology/approach: A survey was conducted among students of Business Administration degree of the Universitat Oberta de Catalunya (UOC). 182 students took part, separated into two groups (pilot and control). Findings: It has been proved that 90% of students give a great or very great importance to reception of feedback from their tutors, a relevance they consider to be higher than the one within a face-to-face environment. This percentage is around 75% with regard to the importance given to the level of personalization of feedback. The development of a factor analysis has revealed that usefulness of personalized feedback perceived by the students can be subsumed under two large dimensions: the one that facilitates learning (related to its semantic dimension) and the motivational one (by allowing an easier and more fluid communication with the tutor, contributing not to leave the course, etc.) The latter dimension has been also proved to be key in order to attain improvements in the students’ satisfaction with the learning process. This research was funded by the Catalan government and the UOC, within the framework of projects to Improve Teaching Quality (ITQ). Originality/value: Implementing personalized feedback has a relevant impact on the student, who values it because it makes his learning process easier, richer and more significant. Moreover, it has a clear motivational effect over the student, which had not been sufficiently evidenced by other researches. Such effect needs not to be underestimated, particularly within an on-line environment, where dropout rate is usually high.
CitationMartínez-Argüelles, María-Jesús [et al.]. Usefulness of feedback in e-learning from the students’ perspective. "Intangible Capital", Octubre 2015, vol. 11, núm. 4, p. 628-645.
URIhttp://hdl.handle.net/2117/80483
DLB-33375-2004
ISSN1697-9818
Collections
Share: