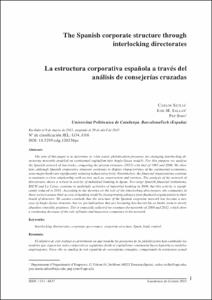 Document typeArticle
Rights accessOpen Access
Abstract
The aim of this paper is to determine to what extent globalization pressures are changing interlocking directorate networks modeled on continental capitalism into Anglo-Saxon models. For this purpose we analyse the Spanish network of interlocks, comparing the present structure (2012) with that of 1993 and 2006. We show how, although Spanish corporative structure continues to display characteristics of the continental economies, some major banks are significantly reducing industrial activity. Nevertheless, the financial organizations continue to maintain a close relationship with sectors such as construction and services. The analysis of the network of directorates shows a retreat in activity of industrial banking in Spain. Two large Spanish financial institutions, BSCH and La Caixa, continue to undertake activities of industrial banking in 2006, but this activity is significantly reduced in 2012. According to the theories on the role of the interlocking directorates, the companies in these sectors assure their access to banking credit by incorporating advisors from financial organizations to their board of directors. We cannot conclude that the structure of the Spanish corporate network has become a new case of Anglo-Saxon structure, but we got indications that are becoming less hierarchic as banks seem to slowly abandon centrality positions. This is especially salient if we compare the networks of 2006 and 2012, which show a continuing decrease of the role of banks and insurance companies in the network.
CitationSicilia, C., Sallan, J., Simo, Pep. The Spanish corporate structure through interlocking directorates. "Cuadernos de Gestión", 2016, Vol. 16, nº 1, p. 63-84.
URIhttp://hdl.handle.net/2117/80386
DOI10.5295/cdg.120336ps
ISSN1131-6837
Collections
Share: