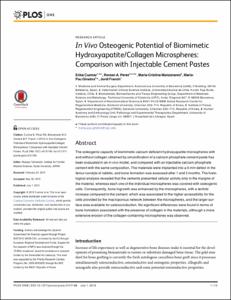 Franch, Jordi
CovenanteeTan'guk Taehakkyo; Universitat Autònoma de Barcelona. Departament de Medicina i Cirurgia Animal; Universitat de Barcelona. Departament de Patologia i Terapèutica Experimental
Document typeArticle
Rights accessOpen Access
Abstract
The osteogenic capacity of biomimetic calcium deficient hydroxyapatite microspheres with and without collagen obtained by emulsification of a calcium phosphate cement paste has been evaluated in an in vivo model, and compared with an injectable calcium phosphate cement with the same composition. The materials were implanted into a 5 mm defect in the femur condyle of rabbits, and bone formation was assessed after 1 and 3 months. The histological analysis revealed that the cements presented cellular activity only in the margins of the material, whereas each one of the individual microspheres was covered with osteogenic cells. Consequently, bone ingrowth was enhanced by the microspheres, with a tenfold increase compared to the cement, which was associated to the higher accessibility for the cells provided by the macroporous network between the microspheres, and the larger surface area available for osteoconduction. No significant differences were found in terms of bone formation associated with the presence of collagen in the materials, although a more extensive erosion of the collagen-containing microspheres was observed.
CitationCuzmar, E., Perez, R., Manzanares, M., Ginebra, M.P., Franch, J. In vivo osteogenic potential of biomimetic hydroxyapatite/collagen microspheres: Comparison with injectable cement pastes. "PLoS one", 01 Juliol 2015, vol. 10, núm. 7.
URIhttp://hdl.handle.net/2117/80304
DOI10.1371/journal.pone.0131188
ISSN1932-6203
Publisher versionhttp://journals.plos.org/plosone/article?id=10.1371/journal.pone.0131188
Collections
Share: