Porosity prediction of calcium phosphate cements based on chemical composition 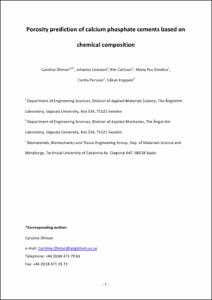 Except where otherwise noted, content on this work is licensed under a Creative Commons license : Attribution-NonCommercial-NoDerivs 3.0 Spain
Abstract
The porosity of calcium phosphate cements has an impact on several important parameters, such as strength, resorbability and bioactivity. A model to predict the porosity for biomedical cements would hence be a useful tool. At the moment such a model only exists for Portland cements. The aim of this study was to develop and validate a first porosity prediction model for calcium phosphate cements. On the basis of chemical reaction, molar weight and density of components, a volume-based model was developed and validated using calcium phosphate cement as model material. 60 mol% beta-tricalcium phosphate and 40 mol% monocalcium phosphate monohydrate were mixed with deionized water, at different liquid-to-powder ratios. Samples were set for 24 h at 37 degrees C and 100 % relative humidity. Thereafter, samples were dried either under vacuum at room temperature for 24 h or in air at 37 degrees C for 7 days. Porosity and phase composition were determined. It was found that the two drying protocols led to the formation of brushite and monetite, respectively. The model was found to predict well the experimental values and also data reported in the literature for apatite cements, as deduced from the small absolute average residual errors (<2.0 %). In conclusion, a theoretical model for porosity prediction was developed and validated for brushite, monetite and apatite cements. The model gives a good estimate of the final porosity and has the potential to be used as a porosity prediction tool in the biomedical cement field.
CitationOhman, C., Unusson, J., Carlsson, E., Ginebra, M.P., Persson, C., Engqvist, H. Porosity prediction of calcium phosphate cements based on chemical composition. "Journal of materials science. Materials in medicine", 01 Juliol 2015, vol. 26, núm. 7.
URIhttp://hdl.handle.net/2117/80302
DOI10.1007/s10856-015-5497-0
ISSN0957-4530
Publisher versionhttp://link.springer.com/article/10.1007%2Fs10856-015-5497-0
Collections
Share: