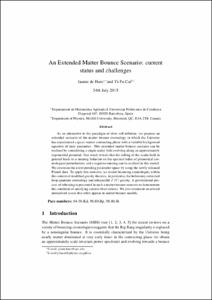 As an alternative to the paradigm of slow roll inflation, we propose an extended scenario of the matter bounce cosmology in which the Universe has experienced a quasi-matter contracting phase with a variable background equation of state parameter. This extended matter bounce scenario can be realized by considering a single scalar field evolving along an approximately exponential potential. Our result reveals that the rolling of the scalar field in general leads to a running behavior on the spectral index of primordial cosmological perturbations and a negative running can be realized in this model. We constrain the corresponding parameter space by using the newly released Planck data. To apply this scenario, we revisit bouncing cosmologies within the context of modified gravity theories, in particular, the holonomy corrected loop quantum cosmology and teleparallel F(T) gravity. A gravitational process of reheating is presented in such a matter bounce scenario to demonstrate the condition of satisfying current observations. We also comment on several unresolved issues that often appear in matter bounce models.
CitationHaro, J., Cai, Y. An extended matter bounce scenario: current status and challenges. "General relativity and gravitation", 01 Agost 2015, vol. 47, núm. 8.
URIhttp://hdl.handle.net/2117/80300
DOI10.1007/s10714-015-1936-y
ISSN0001-7701
Publisher versionhttp://link.springer.com/article/10.1007%2Fs10714-015-1936-y