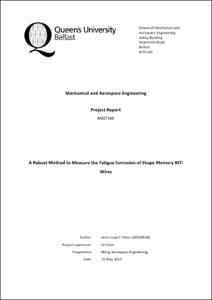 Except where otherwise noted, content on this work is licensed under a Creative Commons license : Attribution-NonCommercial-NoDerivs 3.0 Spain
Abstract
In the field of NiTi alloys medical implants, it becomes a necessity to have a good understanding of fatigue and corrosion resistance. In the present study, a reliable method was developed in order to assess experimentally the influence of a corrosive environment on the fatigue resistance of 0.5 mm diameter NiTi wires. For this purpose, a corrosion cell was designed with Solidworks CAD tool and later fabricated by using 3D printing technology. Besides, supports for the setup were fabricated through laser cutting of MDF plates. Once the corrosion cell was fabricated, it was coupled with a Bending Rotation Fatigue setup and both parts were fixed over their supports. Experiments were carried out using the resulting test rig, to make sure it was a good tool to assess the simultaneous effect of fatigue and corrosion on material integrity. The tests were performed at slow rotation speed and a certain strain amplitude until the failure of the sample. During their performance, a certain area of the wire was permanently in contact with the electrolyte (3.5% NaCl solution) placed inside the corrosion cell. This experimental procedure allowed getting some preliminary results and validating the functionality and correct design of the test rig. The sample of the first test, performed with the BRF setup and the corrosion cell, broke prematurely in a wrong site. Observations of the sample at different surface points were done with the optical microscope. Existence of corrosion on the material surface was not detected due to the short exposure time of the wire to the corrosive environment. The second test worked properly but due to a lack of time, the sample was characterized before its failure. Optical images collected with the microscope showed a significant difference compared to the previous observations and what seemed to be the beginning of pitting corrosion was detected. Based on the results, design modifications were proposed in order to minimize the test rig probability of failure in future investigation. With this experimental procedure, the main objective was to assure that the designed setup was reliable for its use in further investigation.
SubjectsImplants, Artificial -- Materials, Nickel-titanium alloys, Wire -- Testing, Implants artificials -- Materials, Níquel-titani -- Aliatges, Filferros -- Proves
URIhttp://hdl.handle.net/2117/80063
Collections
Share: