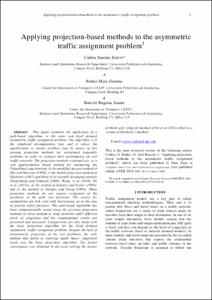 Document typeArticle
Rights accessOpen Access
Abstract
This article examines the application of a path-based algorithm to the static and fixed demand asymmetric traffic assignment problem. The algorithm is of the simplicial decomposition type and it solves the equilibration or master problem step by means of five existing projection methods for variational inequality problems to evaluate their performance on real traffic networks. The projection methods evaluated are: (1) a cost approximation-based method for minimizing the Fukushima's gap function, (2) the modified descent method of Zhu and Marcotte (), (3) the double projection method of Khobotov () and three of its recently developed variants (Nadezhkina and Takahashi, ; Wang etal., ; and He etal., 2012); (4) the method of Solodov and Svaiter (); and (5) the method of Solodov and Tseng (). These projection methods do not require evaluation of the Jacobians of the path cost functions. The source for asymmetries are link costs with interactions, as in the case of priority ruled junctions. The path-based algorithm has been computationally tested using the previous projection methods on three medium to large networks under different levels of congestion and the computational results are presented and discussed. Comparisons are also made with the basic projection algorithm for the fixed demand asymmetric traffic assignment problem. Despite the lack of monotonicity properties of the test problems, the only method that failed to converge under heavy congestion levels was the basic projection algorithm. The fastest convergence was obtained in all cases solving the master problem step using the method of He et al. (2012), which is a variant of Khobotov's method.
CitationCodina, E., Ibañez, G., Barcelo, J. Applying projection-based methods to the asymmetric traffic assignment problem. "Computer-aided civil and infrastructure engineering", 01 Febrer 2015, vol. 30, núm. 2, p. 103-119.
URIhttp://hdl.handle.net/2117/80036
DOI10.1111/mice.12069
ISSN1093-9687
Collections
Share: