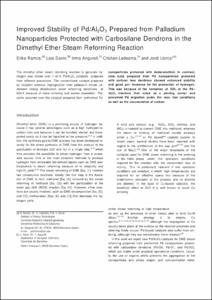 The dimethyl ether steam reforming reaction to generate hydrogen was tested over 1wt% Pd/Al2O3 catalysts prepared from different precursors. The conventional catalyst prepared by incipient wetness impregnation from palladium nitrate underwent strong deactivation under reforming conditions at 823K because of metal sintering and carbon deposition. The same occurred over the catalyst prepared from preformed Pd nanoparticles protected with dodecanethiol. In contrast, catalysts prepared from Pd nanoparticles protected with carbosilane dendrons showed enhanced stability and good performance for the production of hydrogen. This was because of the formation of SiO2 at the Pd-Al2O3 interface that acted as a pinning center and prevented Pd migration under the reaction conditions as well as the accumulation of carbon.
CitationRamos, E., Davin, L., Angurell, I., Ledesma, C., Llorca, J. Improved stability of Pd/Al2O3 prepared from palladium nanoparticles protected with carbosilane dendrons in the dimethyl ether steam reforming reaction. "ChemCatChem", 01 Juliol 2015, vol. 7, núm. 14, p. 2179-2187.
URIhttp://hdl.handle.net/2117/79994
DOI10.1002/cctc.201500202
ISSN1867-3880