Gripper design and development for a modular robot 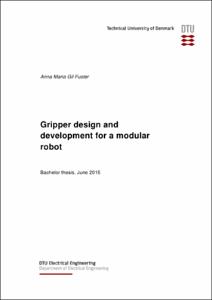 Except where otherwise noted, content on this work is licensed under a Creative Commons license : Attribution-NonCommercial-NoDerivs 3.0 Spain
Abstract
Since the humanity was born, hands have been the most essential parts of the body for our interaction with the environment. It would make no sense to receive a huge amount of information through the senses and processing it incredibly fast in the brain if then you cannot perform consequently. And just as human hands are the organs of human manipulation, if we make the comparison with a robot, their prehension tools are what is commonly called “grippers”. As the end of the kinematic chain, is usually the only part in direct contact with the work piece as well. It can be defined as: Grippers: “Subsystems of handling mechanisms which provide temporary contact with the object to be grasped. They ensure the position and orientation when carrying and mating the object to the handling equipment. Prehension is achieved by force producing and form matching elements. The term “gripper” is also used in cases where no actual grasping, but rather holding of the object as e.g. in vacuum suction where the retention force can act on a point, line or surface.” Definition from (1). Human hands are capable of grasping objects of an enormous range of sizes, shapes and weighs. This is a difficult achievement for a robot gripper and it is only possible due to the greatest variety of designs for either specific tasks or general ones than can be found nowadays. Matching the necessity of a robot to be able to pick up objects with the increasing trend of DIT (Do it yourself), a modular robot with a gripper module will encourage people to build their own robot learning in different fields as mechanics or programming while enjoying their time.
SubjectsRobots -- Design and construction, Robot hands, Manipulators (Mecanism), Robots -- Disseny i construcció, Mans mecàniques, Manipuladors (Mecanismes)
ProvenanceAquest document conté originàriament altre material i/o programari no inclòs en aquest lloc web
URIhttp://hdl.handle.net/2117/79988
Collections
Share: