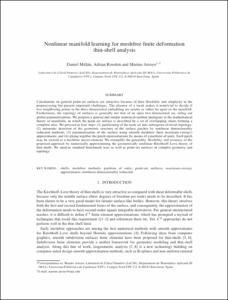 Calculations on general point-set surfaces are attractive because of their flexibility and simplicity in the preprocessing but present important challenges. The absence of a mesh makes it nontrivial to decide if two neighboring points in the three-dimensional embedding are nearby or rather far apart on the manifold. Furthermore, the topology of surfaces is generally not that of an open two-dimensional set, ruling out global parametrizations. We propose a general and simple numerical method analogous to the mathematical theory of manifolds, in which the point-set surface is described by a set of overlapping charts forming a complete atlas. We proceed in four steps: (1) partitioning of the node set into subregions of trivial topology; (2) automatic detection of the geometric structure of the surface patches by nonlinear dimensionality reduction methods; (3) parametrization of the surface using smooth meshfree (here maximum-entropy ) approximants; and (4) gluing together the patch representations by means of a partition of unity. Each patch may be viewed as a meshfree macro-element. We exemplify the generality, flexibility, and accuracy of the proposed approach by numerically approximating the geometrically nonlinear Kirchhoff–Love theory of thin-shells. We analyze standard benchmark tests as well as point-set surfaces of complex geometry and topology.
CitationMillán, D., Arroyo, M., Rosolen, A.M. Nonlinear manifold learning for meshfree finite deformation thin shell analysis. "International journal for numerical methods in engineering", Febrer 2013, vol. 93, núm. 7, p. 685-713.
URIhttp://hdl.handle.net/2117/79963
DOI10.1002/nme.4403
ISSN0029-5981
Publisher versionhttps://onlinelibrary.wiley.com/doi/abs/10.1002/nme.4403