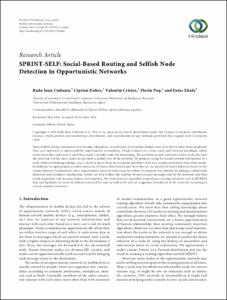 Document typeArticle
Rights accessOpen Access
European Commission's projectERRIC - Empowering Romanian Research on Intelligent Information Technologies (EC-FP7-264207)
Abstract
Since mobile devices nowadays have become ubiquitous, several types of networks formed over such devices have been proposed. One such approach is represented by opportunistic networking, which is based on a store-carry-and-forward paradigm, where nodes store data and carry it until they reach a suitable node for forwarding. The problem in such networks is how to decide what the next hop will be, since nodes do not have a global view of the network. We propose using the social network information of a node when performing routing, since a node is more likely to encounter members of its own social community than other nodes. In addition, we approximate a node's contact as a Poisson distribution and show that we can predict its future behavior based on the contact history. Furthermore, since opportunistic network nodes may be selfish, we improve our solution by adding a selfish node detection and avoidance mechanism, which can help reduce the number of unnecessary messages sent in the network, and thus avoid congestion and decrease battery consumption. We show that our algorithm outperforms existing solutions such as BUBBLE Rap and Epidemic in terms of delivery cost and hit rate, as well as the rate of congestion introduced in the network, by testing in various realistic scenarios.
CitationCiobanu, R., Dobre, C., Cristea , V., Pop, F., Xhafa, F. SPRINT-SELF: social-based routing and selfish node detection in opportunistic networks. "Mobile information systems", 01 Gener 2015, vol. 2015.
URIhttp://hdl.handle.net/2117/79735
DOI10.1155/2015/596204
ISSN1574-017X
Publisher versionhttp://www.hindawi.com/journals/misy/2015/596204/
Collections
Share: