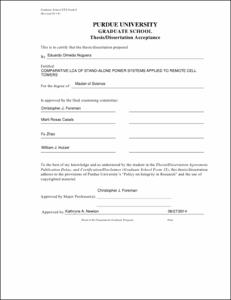 Remote cell towers need on-site power generation or stand-alone power systems for operation and, traditionally, diesel electric generators have been used as backup power systems in combination with renewable energies. Currently, Polymer Electrolyte Membrane Fuel Cells (PEMFC’s) are emerging as substitutes for the diesel electric generator, because of their reliability, high-energy conversion efficiency and zero emissions while operating. However, very few studies have compared the environmental impact of these two technologies, especially on remote cell tower applications. As PEMFC’s have no emissions while operating, concerns about their environmental impact surge because of the use of rare and high processed materials, such as Platinum or carbon fiber. The first stage of this research involves the design of two stand-alone power systems using a microgrid design software (HOMER), utilizing the mentioned technologies for such applications, in two different scenarios that differ in solar radiation. The purpose is to obtain the components used by the power systems and carry out a comparative environmental analysis, which would consist in a Life Cycle Assessment. The results of the Life Cycle Assessment (LCA) conclude that the use of PEMFC as backup systems in the mentioned applications results in less environmental impacts than the use of diesel electric generators.
SubjectsProton exchange membrane fuel cells, Product life cycle--Environmental aspects, Piles de combustible de membrana d'intercanvi de protons, Cicle de vida del producte -- Aspectes ambientals
URIhttp://hdl.handle.net/2117/79663