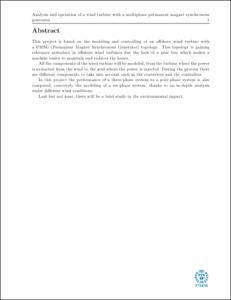 Document typeBachelor thesis
Rights accessOpen Access
Abstract
This project is based on the modeling and controlling of an offshore wind turbine with a PMSG (Permanent Magnet Synchronous Generator) topology. This topology is gaining relevance nowadays in offshore wind turbines due the lack of a gear box which makes a machine easier to maintain and reduces the losses. All the components of the wind turbine will be modeled, from the turbine where the power is extracted from the wind to the grid where the power is injected. During the process there are different components to take into account such as the converters and the controllers. In this project the performance of a three-phase system to a poly-phase system is also compared, concretely the modeling of a six-phase system, thanks to an in-depth analysis under different wind conditions. Last but not least, there will be a brief study in the environmental impact.
SubjectsWind turbines, Permanent magnet motors, Aerogeneradors, Motors d’imants permanents
URIhttp://hdl.handle.net/2117/79594
Collections
Share: