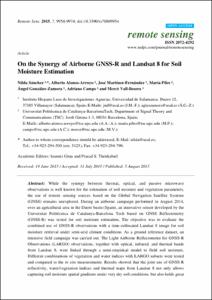 While the synergy between thermal, optical, and passive microwave observations is well known for the estimation of soil moisture and vegetation parameters, the use of remote sensing sources based on the Global Navigation Satellite Systems (GNSS) remains unexplored. During an airborne campaign performed in August 2014, over an agricultural area in the Duero basin (Spain), an innovative sensor developed by the Universitat Politecnica de Catalunya-Barcelona Tech based on GNSS Reflectometry (GNSS-R) was tested for soil moisture estimation. The objective was to evaluate the combined use of GNSS-R observations with a time-collocated Landsat 8 image for soil moisture retrieval under semi-arid climate conditions. As a ground reference dataset, an intensive field campaign was carried out. The Light Airborne Reflectometer for GNSS-R Observations (LARGO) observations, together with optical, infrared, and thermal bands from Landsat 8, were linked through a semi-empirical model to field soil moisture. Different combinations of vegetation and water indices with LARGO subsets were tested and compared to the in situ measurements. Results showed that the joint use of GNSS-R reflectivity, water/vegetation indices and thermal maps from Landsat 8 not only allows capturing soil moisture spatial gradients under very dry soil conditions, but also holds great promise for accurate soil moisture estimation (correlation coefficients greater than 0.5 were obtained from comparison with in situ data).
CitationSanchez, N., Alonso-Arroyo, A., Martinez, J., Piles, M., Gonzalez, A., Camps, A., Vall-llossera, M. On the synergy of airborne GNSS-R and landsat 8 for soil moisture estimation. "Remote sensing", 01 Agost 2015, vol. 7, núm. 8, p. 9954-9974.
URIhttp://hdl.handle.net/2117/79572
DOI10.3390/rs70809954
ISSN2072-4292
Publisher versionhttp://www.mdpi.com/2072-4292/7/8/9954