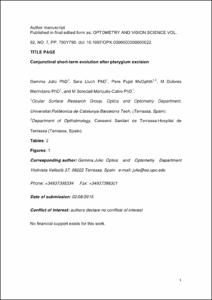 Purpose To analyze conjunctival cytological features 1 month after pterygium excision using limbo-conjunctival autograft (LCA) with and without intraoperative mitomycin C and to assess tissue short-term evolution in both situations.; Methods Fifty-nine primary nasal pterygia from 59 patients were excised with LCA. Twenty-nine were treated with intraoperative mitomycin C 0.02% (MMC+) and 30 were treated without it (MMC-). Impression cytology was performed in nasal and temporal conjunctiva before and 1 month after the excision. Goblet cell density (GCD) and nucleus-to-cytoplasm nongoblet epithelial cell ratio were quantified.; Results Surgical strategy comparisons (intergroup comparisons): All the preoperative data were, in mean, within the reference range, except for a slight goblet cell hyperplasia in the area of the lesion in MMC+ but no significant differences were found between the groups (p = 0.079 for GCD and p = 0.245 for nucleus-to-cytoplasm ratio; analysis of variance). Clinically relevant differences after surgery were only shown in nasal GCD that was significantly lower in MMC+ than in MMC- (p = 0.000; analysis of variance), with the mean value in MMC+ slightly below normal values whereas that in MMC- remained normal. Tissue evolution (intragroup comparisons): No clinically relevant changes were found in MMC-. Data from MMC+ displayed no changes 1 month after surgery, except for nasal GCD that showed a significant reduction (p = 0.000; paired t test). Nevertheless, this GCD decrease was more modest than that previously described using mitomycin C without autograft, because in the present study, nasal GCD was not lower but similar to postoperative temporal data of the same eye (p = 0.164; paired t test).; Conclusions Limbo-conjunctival autograft is a good technique for conjunctiva early recovery. When mitomycin C was added, the GCD reduction was lower than described using other surgical techniques. Mitomycin C, in optimal concentration and exposure, associated with LCA could be a good clinical option to minimize pterygium recurrence.
CitationJulio, G., Lluch, S., Pujol, P., Merindano, M., Marques, M.S. Conjunctival Short-term Evolution after Pterygium Excision. "Optometry and vision science", 01 Juliol 2015, vol. 92, núm. 7, p. 790-795.
URIhttp://hdl.handle.net/2117/79559
DOI10.1097/OPX.0000000000000622
ISSN1040-5488