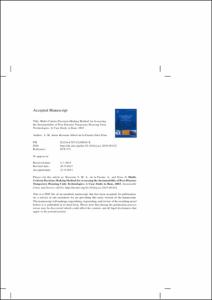 Temporary housing units (THUs) have been used for displaced population (DP) in the aftermath of naturaldisasters to serve as an alternative residence while the permanent housing process is completed. A THU isoften provided as a prefabricated system, which has been criticized due to the economic, environmental,and social aspects of THUs. However, this model has been widely used in previous recovery programs.Additionally, it should be highlighted that the lack of potential of certain areas persuades decision-makersto implement the THUs. This paper presents a new model for choosing optimized THUs based on thesustainability concept. This model supports decision-makers in selecting a more adequate type of THU,to reduce the negative impact of temporary housing (TH) when there is no other possibility.The Integrated Value Model for Sustainable Assessment (MIVES), a Multi-Criteria Decision Making(MCDM) model that includes the value function concept, is used to evaluate the sustainability value ofeach THU alternative.THU technologies that had been suggested for the Bam earthquake recovery program by a semi-public organization have been analysed by this method to achieve two aims: (1) to determine the mostsustainable technology to use and (2) to test the designed model.
CitationAmir, S., de la Fuente, A., Pons-Valladares, O. Multi-criteria decision-making method for assessing the sustainability of post-disaster temporary housing units technologies: a case study in Bam, 2003. "Sustainable cities and society", Gener 2016, vol. 20, p. 38-51.
URIhttp://hdl.handle.net/2117/79510
DOI10.1016/j.scs.2015.09.012
ISSN2210-6707
Publisher versionhttp://www.sciencedirect.com/science/article/pii/S221067071530038X