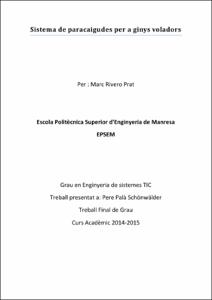 Document typeBachelor thesis
Rights accessOpen Access
Abstract
The objective of this project, is to develop a system for deploying a parachute in order to save the integrity of various flying widgets. This project was developed having in mind the idea of saving a drone. This goal wants to be achieved using the information given by a barometrical sensor. The project itself starts explaining the physics behind the movement of the whole parachute. It talks about the different forces acting on the body, like the speed and acceleration achieved during the free fall, before and after deploying the parachute. Then the shape of the parachute is also studied in order to obtaining the biggest drag force possible for going against the gravity force. The time of opening is also important so it will be explained. the next part explains the device that makes the deployment of the parachute be possible, explaining all of the parts of this device. This parts are: the barometric sensor, the EEPROM memory and the Arduino Nano among others. One of the most important parts for making this possible, is the software. The software allows to the different parts of the project work together. It is explained how the software works for achieving our primary goal: save the flying device attached to it. This project, also explains some issues that occurred during the assembly of the different electronic components and how a printed circuit board can help on it. It also explain how to build one. One of the last parts explained in the project is the assembly of the whole project, starting from the assembly of the mechanical parts up to the assembly of the electronic parts. For ending the project, an experiment proving the efficiency of the parachute is done dropping the parachute from a high position in order to see if the parachute is deployed or not. The last part of the project are the conclusions achieved during the realisation of the project, and the thanks to the people that has contributed on the project
SubjectsFlight control, Parachutes, Drone aircraft--Automatic control, Atmospheric pressure--Measurement, Sistemes de control (Vol), Paracaigudes, Avions no tripulats, Baròmetres
DegreeGRAU EN ENGINYERIA DE SISTEMES TIC (Pla 2010)
URIhttp://hdl.handle.net/2117/79458
Collections
Share: