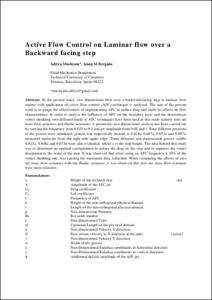 In the present study, two dimensional flow over a backward-facing step in laminar flow regime with application of active flow control (AFC) technique is analysed. The aim of the present work is to gauge the effectiveness of implementing AFC to reduce drag and study its effects on flow characteristics. In order to analyse the influence of AFC on the boundary layer and the downstream vortex shedding, two different kinds of AFC techniques have been used in this study namely zero net mass flow actuators and fluidic actuators. A parametric non dimensional analysis has been carried out by varying the frequency from 0.025 to 0.1 and jet amplitude from 0.05 and 1. Four different positions of the groove were simulated; groove was respectively located at 0.024a, 0.047a, 0.072a and 0.097a, measured upstream from the right side upper edge. Three different non dimensional groove widths 0.023a, 0.048a and 0.073a were also evaluated, where a is the step height. The idea behind this study was to determine an optimal configuration to reduce the drag on the step and to suppress the vortex dissipation in the wake of the step. It was observed that when using an AFC frequency ± 10% of the vortex shedding one, was causing the maximum drag reduction. When comparing the effects of zero net mass flow actuators with the fluidic actuators, it was observed that zero net mass flow actuators were more effective.
CitationMushyam, A., Bergadà, J.M. Active flow control on laminar flow over a backward facing step. A: "Journal of physics: conference series". Institute of Physics (IOP), 2015.
URIhttp://hdl.handle.net/2117/79437
DOI10.1088/1742-6596/633/1/012110
ISSN1742-6588
Publisher versionhttp://iopscience.iop.org/article/10.1088/1742-6596/633/1/012110