Taming of modulation instability by spatio-temporal modulation of the potential 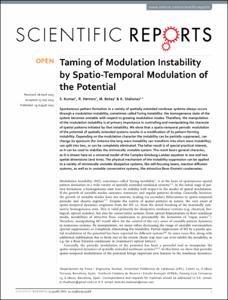 Spontaneous pattern formation in a variety of spatially extended nonlinear systems always occurs through a modulation instability, sometimes called Turing instability: the homogeneous state of the system becomes unstable with respect to growing modulation modes. Therefore, the manipulation of the modulation instability is of primary importance in controlling and manipulating the character of spatial patterns initiated by that instability. We show that a spatio-temporal periodic modulation of the potential of spatially extended systems results in a modification of its pattern forming instability. Depending on the modulation character the instability can be partially suppressed, can change its spectrum (for instance the long wave instability can transform into short wave instability), can split into two, or can be completely eliminated. The latter result is of special practical interest, as it can be used to stabilize the intrinsically unstable system. The result bears general character, as it is shown here on a universal model of the Complex Ginzburg-Landau equation in one and two spatial dimensions (and time). The physical mechanism of the instability suppression can be applied to a variety of intrinsically unstable dissipative systems, like self-focusing lasers, reaction-diffusion systems, as well as in unstable conservative systems, like attractive Bose Einstein condensates.
CitationKumar, S., Herrero, R., Botey, M., Staliunas, K. Taming of modulation instability by spatio-temporal modulation of the potential. "Scientific reports", 19 Agost 2015, vol. 5, núm. 13268, p. 1-7.
URIhttp://hdl.handle.net/2117/79387
DOI10.1038/srep13268
ISSN2045-2322