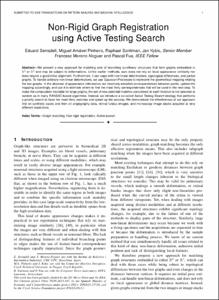 Fua, Pascal
Document typeArticle
Rights accessOpen Access
Abstract
We present a new approach for matching sets of branching curvilinear structures that form graphs embedded in R^2 or R^3 and may be subject to deformations. Unlike earlier methods, ours does not rely on local appearance similarity nor does require a good initial alignment. Furthermore, it can cope with non-linear deformations, topological differences, and partial graphs. To handle arbitrary non-linear deformations, we use Gaussian Processes to represent the geometrical mapping relating the two graphs. In the absence of appearance information, we iteratively establish correspondences between points, update the mapping accordingly, and use it to estimate where to find the most likely correspondences that will be used in the next step. To make the computation tractable for large graphs, the set of new potential matches considered at each iteration is not selected at random as in many RANSAC-based algorithms. Instead, we introduce a so-called Active Testing Search strategy that performs a priority search to favor the most likely matches and speed-up the process. We demonstrate the effectiveness of our approach first on synthetic cases and then on angiography data, retinal fundus images, and microscopy image stacks acquired at very different resolutions.
CitationSerradell, E., Amável , M., Sznitman, R., Kybic, J., Moreno-Noguer, F., Fua, P. Non-rigid graph registration using active testing search. "IEEE transactions on pattern analysis and machine intelligence", 2015, vol. 37, núm. 3, p. 625-638.
URIhttp://hdl.handle.net/2117/79376
DOI10.1109/TPAMI.2014.2343235
ISSN0162-8828
Publisher versionhttp://ieeexplore.ieee.org/stamp/stamp.jsp?tp=&arnumber=6866165
Collections
Share: