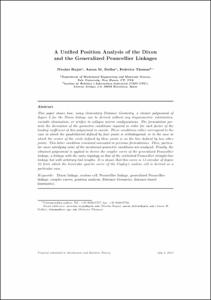 Document typeArticle
Rights accessOpen Access
All rights reserved. This work is protected by the corresponding intellectual and industrial property rights. Without prejudice to any existing legal exemptions, reproduction, distribution, public communication or transformation of this work are prohibited without permission of the copyright holder
Abstract
This paper shows how, using elementary Distance Geometry, a closure polynomial of degree 8 for the Dixon linkage can be derived without any trigonometric substitution, variable elimination, or artifice to collapse mirror configurations. The formulation permits the derivation of the geometric conditions required in order for each factor of the leading coefficient of this polynomial to vanish. These conditions either correspond to the case in which the quadrilateral defined by four joints is orthodiagonal, or to the case in which the center of the circle defined by three joints is on the line defined by two other joints. This latter condition remained concealed in previous formulations. Then, particular cases satisfying some of the mentioned geometric conditions are analyzed. Finally, the obtained polynomial is applied to derive the coupler curve of the generalized Peaucellier linkage, a linkage with the same topology as that of the celebrated Peaucellier straight-line linkage but with arbitrary link lengths. It is shown that this curve is 11-circular of degree 22 from which the bicircular quartic curve of the Cayley's scalene cell is derived as a particular case.
CitationRojas , N.E., Dollar, A., Thomas, F. A unified position analysis of the Dixon and the generalized Peaucellier linkages. "Mechanism and machine theory", 01 Desembre 2015, vol. 94, p. 28-40.
URIhttp://hdl.handle.net/2117/79349
DOI10.1016/j.mechmachtheory.2015.07.008
ISSN0094-114X
Publisher versionhttp://www.sciencedirect.com/science/article/pii/S0094114X1500169X
Collections
Share: