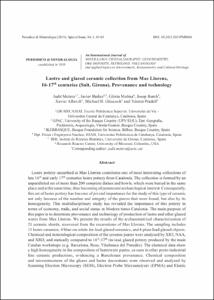 Lustre pottery unearthed at Mas Llorens constitutes one of most interesting collections of late 16th and early 17th centuries lustre pottery from Catalonia. The collection is formed by an unparalleled set of more than 200 complete dishes and bowls, which were buried in the same place and at the same time, thus becoming of paramount archaeological interest. Consequently, this set of lustre pottery has become of pivotal importance for the study of this type of ceramic not only because of the number and integrity of the pieces that were found, but also by its homogeneity. This multidisciplinary study has revealed the importance of this pottery in terms of economy, trade, and social status in Modern times Catalonia. The main purpose of this paper is to determine provenance and technology of production of lustre and other glazed wares from Mas Llorens. We present the results of the archaeometrical characterization of 21 ceramic sherds, recovered from the excavations of Mas Llorens. The sampling includes 11 lustre ceramics, 4 blue-on-white tin-lead-glazed ceramics, and 6 plain lead glazed objects. Chemical and mineralogical composition of the ceramic pastes were analyzed by XRF, NAA, and XRD, and statically compared to 16th-17th tin-lead glazed pottery produced by the main Catalan workshops (e.g. Barcelona, Reus, Vilafranca del Penedes). The chemical data show a high homogeneity in the composition of lustreware pastes, as seen in other proto-industrial fine ceramic productions, evidencing a Barcelonan provenance. Chemical composition and microstructures of the glazes and lustre decorations were observed and analyzed by Scanning Electron Microscopy (SEM), Electron Probe Microanalyzer (EPMA) and Elastic ion backscattering spectroscopy (EIBS). Successful lustre exhibits a red-copper color and metallic shine; it contains more copper than silver (average concentration, 9.5 wt% and 3.4 wt% respectively) with a ratio of wt% Cu/(Cu+Ag) = 62%, in the form of copper and silver nanoparticles which are concentrated in a thin layer (<300 nm) very close to the surface. On the contrary, in the unsuccessful brown lustre lacking metallic shine, although the copper to silver ratio is similar - wt% Cu/(Cu+Ag) = 63% -, the copper nanoparticles are distributed in a thick layer (1 micron thickness) but in lower concentration (average concentration in the layer 3.4 wt%), while the silver nanoparticles appear concentrated on a thinner surface layer. The lack of metallic shine in those samples is explained by the low concentration of silver and copper nanoparticles in the layer. This may be related to a deficient reducing firing capable of reducing copper to the metallic state and stopping its diffusion into the glaze.
CitationMolera, J., Iñañez,J. G., Molina, G., Burch, J., Alberch, X., Glascock, M., Pradell, T. Lustre and glazed ceramic collection from Mas Llorens, 16-17th centuries (Salt, Girona). Provenance and technology. "Periodico di Mineralogia", 01 Abril 2015, vol. 84, núm. 1, p. 45-63.
URIhttp://hdl.handle.net/2117/79319
DOI10.2451/2015PM0004
ISSN0369-8963