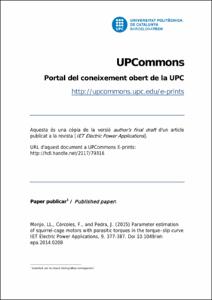 Document typeArticle
Rights accessOpen Access
Abstract
This paper studies parasitic torques in steady-state torque–slip curves of squirrel-cage induction motors. The curves of nine motors (small, medium and large size units), three of which were measured in the range s = 2 to 0, are analysed. The torque–slip curves of eight of these nine motors differ significantly from the smooth curves predicted by the classical single- and double-cage models: a torque dip at large slips in the motoring regime and a notable torque increase in the braking regime occur. As parasitic torques have been traditionally associated with space harmonics, two singlecage chain models (which consider the space harmonics) are tested to fit the measured torque and current of the three measured motors: one neglects the skin effect, leading to the wrong torque prediction, whereas the other (the chain model proposed in the early 60s in the literature) considers the skin effect, leading to an accurate torque prediction.
CitationMonjo, L., Corcoles, F., Pedra, J. Parameter estimation of squirrel-cage motors with parasitic torques in the torque–slip curve. "IET electric power applications", 16 Abril 2015, vol. 9, núm. 5, p. 377-387.
URIhttp://hdl.handle.net/2117/79316
DOI10.1049/iet-epa.2014.0208
ISSN1751-8660
Collections
Share: