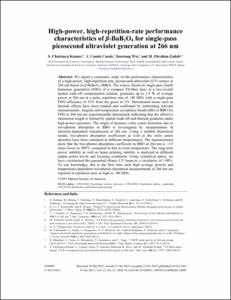 Except where otherwise noted, content on this work is licensed under a Creative Commons license : Attribution-NonCommercial-NoDerivs 3.0 Spain
ProjectOSCILADORES OPTICOS PARAMETRICOS CON FLEXIBILIDAD POTENCIADA (MINECO-TEC2012-37853)
Abstract
We report a systematic study on the performance characteristics of a high-power, high-repetition-rate, picosecond ultraviolet (UV) source at 266 nm based on β-BaB2O4 (BBO). The source, based on single-pass fourth harmonic generation (FHG) of a compact Yb-fiber laser in a two-crystal spatial walk-off compensation scheme, generates up to 2.9 W of average power at 266 nm at a pulse repetition rate of ~80 MHz with a single-pass FHG efficiency of 35% from the green to UV. Detrimental issues such as thermal effects have been studied and confirmed by performing relevant measurements. Angular and temperature acceptance bandwidths in BBO for FHG to 266 nm are experimentally determined, indicating that the effective interaction length is limited by spatial walk-off and thermal gradients under high-power operation. The origin of dynamic color center formation due to two-photon absorption in BBO is investigated by measurements of intensity-dependent transmission at 266 nm. Using a suitable theoretical model, two-photon absorption coefficients as well as the color center densities have been estimated at different temperatures. The measurements show that the two-photon absorption coefficient in BBO at 266 nm is ~3.5 times lower at 200°C compared to that at room temperature. The long-term power stability as well as beam pointing stability is analyzed at different output power levels and focusing conditions. Using cylindrical optics, we have circularized the generated elliptic UV beam to a circularity of >90%. To our knowledge, this is the first time such high average powers and temperature-dependent two-photon absorption measurements at 266 nm are reported at repetition rates as high as ~80 MHz.
URIhttp://hdl.handle.net/2117/79208
ISSN1094-4087
Publisher versionhttps://www.osapublishing.org/oe/abstract.cfm?uri=oe-23-21-28091
Collections
Share: