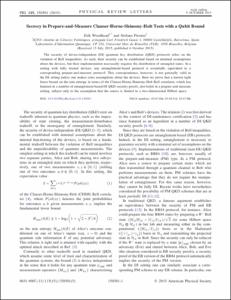 Show full item record
Woodhead, Erik
Pironio, Stefano
Document typeArticle
PublisherAPS
Rights accessOpen Access
Abstract
The security of device-independent (DI) quantum key distribution (QKD) protocols relies on the violation of Bell inequalities. As such, their security can be established based on minimal assumptions about the devices, but their implementation necessarily requires the distribution of entangled states. In a setting with fully trusted devices, any entanglement-based protocol is essentially equivalent to a corresponding prepare-and-measure protocol. This correspondence, however, is not generally valid in the DI setting unless one makes extra assumptions about the devices. Here we prove that a known tight lower bound on the min entropy in terms of the Clauser-Horne-Shimony-Holt Bell correlator, which has featured in a number of entanglement-based DI QKD security proofs, also holds in a prepare-and-measure setting, subject only to the assumption that the source is limited to a two-dimensional Hilbert space.
URIhttp://hdl.handle.net/2117/79206
ISSN0031-9007
Publisher versionhttp://journals.aps.org/prl/abstract/10.1103/PhysRevLett.115.150501
Collections
Share: