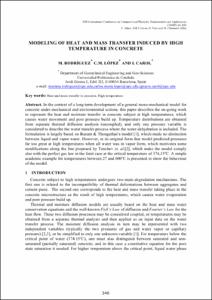 Document typeConference report
PublisherCIMNE
Rights accessOpen Access
Abstract
In the context of a long term development of a general meso-mechanical model for concrete under mechanical and environmental actions, this paper describes the on-going work to represent theheat and moisture transfer in concrete subject at high temperatures, which causes water movement and pore pressure build up. Temperature distributions are obtained from separate thermal diffusion analysis (uncoupled), and only one pressure variable is considered to describe the water transfer process where the water dehydration is included. The formulation is largely based on Bazant & Thonguthai’s model [1], which made no distinction between liquid and vapor water. However, in its original form that model predicted pressures far too great at high temperatures when all water was in vapor form, which motivates some modifications along the line proposed by Tenchev et. al.[2], which make the model comply also with the perfect gas law in the limit case at the critical temperature of 374,15ºC. A simple academic example for temperatures between 27 and 600ºC is presented to show the behaviour of the model.
CitationRodríguez, Mariana; López, Carlos María; Carol, Ignacio. Modeling of heat and mass transfer induced by high temperature in concrete. A: COMPLAS XIII. "COMPLAS XIII : proceedings of the XIII International Conference on Computational Plasticity : fundamentals and applications". Barcelona: CIMNE, 2015, p. 346-353.
URIhttp://hdl.handle.net/2117/79202
ISBN978-84-944244-6-5
Collections
Share: