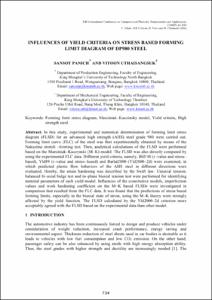 In this study, experimental and numerical determination of forming limit stress diagram (FLSD) for an advanced high strength (AHS) steel grade 980 were carried out. Forming limit curve (FLC) of the steel was first experimentally obtained by means of the Nakazima stretch –forming test. Then, analytical calculations of the FLSD were performed based on the Marciniak–Kuczynski (M–K) model. The FLSD was also directly computed by using the experimental FLC data. Different yield criteria, namely, Hill’48 (r–value and stress–based), Yld89 (r–value and stress–based) and Barlat2000 (Yld2000–2d) were examined, in which predicted plastic flow behaviors of the AHS steel in different directions were evaluated. Hereby, the strain hardening was described by the Swift law. Uniaxial tension, balanced bi–axial bulge test and in–plane biaxial tension test were performed for identifying material parameters of each yield model. Influences of the constitutive models, imperfection values and work hardening coefficient on the M−K based FLSDs were investigated in comparison that resulted from the FLC data. It was found that the predictions of stress based forming limits, especially in the biaxial state of stress, using the M–K theory were strongly affected by the yield function. The FLSD calculated by the Yld2000–2d criterion more acceptably agreed with the FLSD based on the experimental data than other model.
CitationPanich, Sansot; Uthaisangsuk, Vitoon. Influences of yield criteria on stress based forming limit diagram of DP980 steel. A: COMPLAS XIII. "COMPLAS XIII : proceedings of the XIII International Conference on Computational Plasticity : fundamentals and applications". CIMNE ed. Barcelona: CIMNE, 2015, p. 734-746.
URIhttp://hdl.handle.net/2117/79199
ISBN978-84-944244-6-5