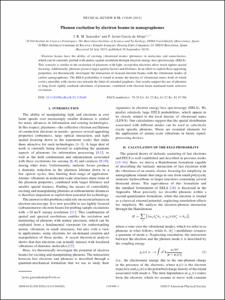 Show full item record
Saavedra, J. R. M.
García de Abajo, Francisco Javier
Document typeArticle
PublisherAPS
Rights accessOpen Access
Abstract
Electron beams have the ability of exciting vibrational modes (phonons) in molecules and nanoclusters, which can be currently probed with atomic spatial resolution through electron energy-loss spectroscopy (EELS). This scenario is similar to the excitation of plasmons with light, except that electrons allow much tighter spatial focusing. Additionally, phonons possess larger quality factors and lifetimes. In an effort to exploit these appealing properties, we theoretically investigate the interaction of focused electron beams with the vibrational modes of carbon nanographenes. The EELS probability is found to mimic the density of vibrational states, both of which evolve smoothly with cluster size towards the limit of extended graphene. Our results support the use of phonons as long-lived, tightly confined substitutes of plasmons, combined with electron-beam-mediated mode-selective excitation
URIhttp://hdl.handle.net/2117/79119
ISSN1098-0121
Publisher versionhttp://journals.aps.org/prb/pdf/10.1103/PhysRevB.92.115449
Collections
Share: