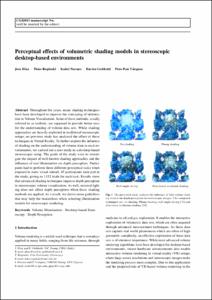 Document typeConference lecture
Rights accessOpen Access
All rights reserved. This work is protected by the corresponding intellectual and industrial property rights. Without prejudice to any existing legal exemptions, reproduction, distribution, public communication or transformation of this work are prohibited without permission of the copyright holder
ProjectSIMULACION, MODELADO AVANZADO Y ANALISIS VISUAL INTERACTIVO DE GRANDES CONJUNTOS DE DATOS (MINECO-TIN2013-47137-C2-1-P)
Abstract
Throughout the years, many shading techniques have been developed to improve the conveying of information in Volume Visualization. Some of these methods, usually referred to as realistic, are supposed to provide better cues for the understanding of volume data sets. While shading approaches are heavily exploited in traditional monoscopic setups, no previous study has analyzed the effect of these techniques in Virtual Reality. To further explore the influence of shading on the understanding of volume data in such environments, we carried out a user study in a desktop-based stereoscopic setup. The goals of the study were to investigate the impact of well-known shading approaches and the influence of real illumination on depth perception. Participants had to perform three different perceptual tasks when exposed to static visual stimuli. 45 participants took part in the study, giving us 1152 trials for each task. Results show that advanced shading techniques improve depth perception in stereoscopic volume visualization. As well, external lighting does not affect depth perception when these shading methods are applied. As a result, we derive some guidelines that may help the researchers when selecting illumination models for stereoscopic rendering.
CitationDíaz, J., Ropinski, T., Navazo, I., Gobbetti, E., Vázquez, P. Perceptual effects of volumetric shading models in stereoscopic desktop-based environments. A: Computer Graphics International. "Proceedings Computer Graphics International". Strasbourg: 2015, p. 1-10.
URIhttp://hdl.handle.net/2117/79099
Collections
Share: