Slope and valley flows at the Cerdanya valley in the Pyrenees 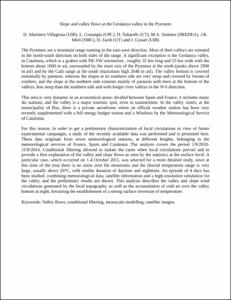 Tabarelli, Davidde
Jiménez, Maria Antònia
Miró, Josep Ramon
Zardi, Dino
Cuxart Rodamillans, Joan
Document typeConference lecture
Rights accessOpen Access
Abstract
The Pyrenees are a mountain range running in the east-west direction. Most of their valleys are oriented in the north-south direction on both sides of the range. A significant exception is the Cerdanya valley, in Catalonia, which is a graben with NE-SW orientation , roughly 35 km long and 15 km wide with the bottom about 1000 m asl, surrounded by the main axis of the Pyrenees at the north (peaks above 2900 m asl) and by the Cadi range at the south (maximum high 2648 m asl). The valley bottom is covered essentially by pastures, whereas the slopes at its southern side are very steep and covered by forests of conifers, and the slope at the northern side consists mainly of pastures with trees at the bottom of the valleys, less steep than the southern side and with longer river valleys in the N-S direction. This area is very dynamic in an economical sense: divided between Spain and France, it includes many ski stations, and the valley is a major touristic spot, even in summertime. In the valley center, at the municipality of Das, there is a private aerodrome where an o_cial weather station has been very recently supplemented with a full energy budget station and a Windrass by the Meteorological Service of Catalonia. For this reason, in order to get a preliminary characterization of local circulations in view of future experimental campaigns, a study of the recently available data was performed and is presented here. These data originate from seven meteorological stations, at di_erent heights, belonging to the meteorological services of France, Spain and Catalonia. The analysis covers the period 1/9/2010-31/8/2014. Conditional filtering allowed to isolate the cases when local circulations prevail and to provide a first explanation of the valley and slope flows as seen by the statistics at the surface level. A particular case, which occurred on 1-4 October 2011, was selected for a more detailed study, since at this time of the year there is no snow over the mountains and the diurnal temperature range is very large, usually above 20°C, with similar duration of daytime and nighttime. An episode of 4 days has been studied, combining meteorological data, satellite information and a high-resolution simulation for the valley, and the preliminary results are shown. This analysis describes the valley and slope wind circulations generated by the local topography, as well as the accumulation of cold air over the valley bottom at night, favouring the establishment of a strong surface inversion of temperature.
CitationMartínez, D., Conangla, L., Tabarelli, D., Jiménez, M., Miró, J., Zardi, D., Cuxart, J. Slope and valley flows at the Cerdanya valley in the Pyrenees. A: ICAM - International Conference on Alpine Meteorology. "ICAM 2015: 33rd International Conference on Alpine Meteorology: Insbruk, Austria: August 31-Sep 4, 2015: abstracts". Innsbruck: 2015, p. 72.
URIhttp://hdl.handle.net/2117/79003
Publisher versionhttp://www.uibk.ac.at/congress/icam2015/abstracts_icam2015.pdf
Collections
Share: