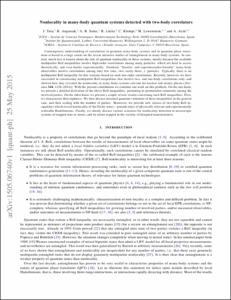 Show full item record
Tura, J.
Augusiak, Remigiusz
Sainz, A. B.
Lücke, B.
Klempt, C.
Lewenstein, Maciej
Acin, Antonio
Document typeArticle
PublisherScience Direct
Rights accessOpen Access
Abstract
Contemporary understanding of correlations in quantum many-body systems and in quantum phase transitions is based to a large extent on the recent intensive studies of entanglement in many-body systems. In contrast, much less is known about the role of quantum nonlocality in these systems, mostly because the available multipartite Bell inequalities involve high-order correlations among many particles, which are hard to access theoretically, and even harder experimentally. Standard, ”theorist- and experimentalist-friendly” many-body observables involve correlations among only few (one, two, rarely three...) particles. Typically, there is no multipartite Bell inequality for this scenario based on such low-order correlations. Recently, however, we have succeeded in constructing multipartite Bell inequalities that involve two- and one-body correlations only, and showed how they revealed the nonlocality in many-body systems relevant for nuclear and atomic physics [Science 344, 1256 (2014)]. With the present contribution we continue our work on this problem. On the one hand, we present a detailed derivation of the above Bell inequalities, pertaining to permutation symmetry among the involved parties. On the other hand, we present a couple of new results concerning such Bell inequalities. First, we characterize their tightness. We then discuss maximal quantum violations of these inequalities in the general case, and their scaling with the number of parties. Moreover, we provide new classes of two-body Bell inequalities which reveal nonlocality of the Dicke states—ground states of physically relevant and experimentally realizable Hamiltonians. Finally, we shortly discuss various scenarios for nonlocality detection in mesoscopic systems of trapped ions or atoms, and by atoms trapped in the vicinity of designed nanostructures.
URIhttp://hdl.handle.net/2117/78958
ISSN0003-4916
Publisher versionhttp://www.sciencedirect.com/science/article/pii/S0003491615002869
Collections
Share: