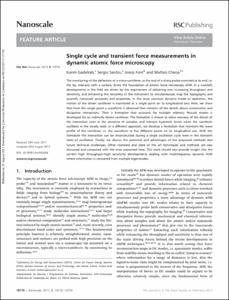 The monitoring of the deflection of a micro-cantilever, as the end of a sharp probe mounted at its end, i.e. the tip, interacts with a surface, forms the foundation of atomic force microscopy AFM. In a nutshell, developments in the field are driven by the requirement of obtaining ever increasing throughput and sensitivity, and enhancing the versatility of the instrument to simultaneously map the topography and quantify nanoscale processes and properties. In the most common dynamic mode of operation, the motion of the driven cantilever is monitored at a single point on its longitudinal axis. Here, we show that from this single point a waveform is obtained that contains all the details about conservative and dissipative interactions. Then a formalism that accounts for multiple arbitrary flexural modes is developed for an indirectly driven cantilever. The formalism is shown to allow recovery of the details of the interaction even in the presence of complex and relevant hysteretic forces when the cantilever oscillates in the steady state. In a different approach, we develop a formalism that monitors the wave profile of the cantilever, i.e. the waveform at five different points on its longitudinal axis. With this formalism the interaction can be reconstructed during a single oscillation cycle even in the transient state of oscillation. Finally, we discuss the potential and advantages of the proposed methods and future technical challenges. Other standard and state of the art techniques and methods are also discussed and compared with the ones presented here. This work should also provide insight into the current high throughput-high sensitivity developments dealing with multifrequency dynamic AFM where information is recovered from multiple eigenmodes. © 2013 The Royal Society of Chemistry.
CitationGadelrab, K.R., Santos, S., Font, J., Chiesa, M. Single cycle and transient force measurements in dynamic atomic force microscopy. "Nanoscale", 21 Novembre 2013, vol. 5, núm. 22, p. 10776-10793.
URIhttp://hdl.handle.net/2117/78946
DOI10.1039/c3nr03338d
ISSN2040-3364
Publisher versionhttp://pubs.rsc.org/en/Content/ArticleLanding/2013/NR/c3nr03338d#!divAbstract