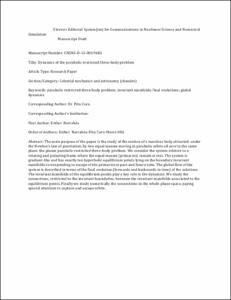 Document typeArticle
Rights accessOpen Access
Abstract
The main purpose of the paper is the study of the motion of a massless body attracted, under the Newton's law of gravitation, by two equal masses moving in parabolic orbits all over in the same plane, the planar parabolic restricted three body problem. We consider the system relative to a rotating and pulsating frame where the equal masses (primaries) remain at rest. The system is gradient like and has exactly ten hyperbolic equilibrium points lying on the boundary invariant manifolds corresponding to escape of the primaries in past and future time. The global flow of the system is described in terms of the final evolution (forwards and backwards in time) of the solutions. The invariant manifolds of the equilibrium points play a key role in the dynamics. We study the connections, restricted to the invariant boundaries, between the invariant manifolds associated to the equilibrium points. Finally we study numerically the connections in the whole phase space, paying special attention to capture and escape orbits.
CitationBarrabés, E., Cors, J., Olle, M. Dynamics of the parabolic restricted three-body problem. "Communications in nonlinear science and numerical simulation", 01 Desembre 2015, vol. 29, núm. 1-3, p. 400-415.
URIhttp://hdl.handle.net/2117/78941
DOI10.1016/j.cnsns.2015.05.025
ISSN1007-5704
Collections
Share: