Locality of temperature in spin chains 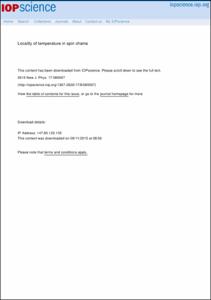 In traditional thermodynamics, temperature is a local quantity: a subsystem of a large thermal system is in a thermal state at the same temperature as the original system. For strongly interacting systems, however, the locality of temperature breaks down. We study the possibility of associating an effective thermal state to subsystems of infinite chains of interacting spin particles of arbitrary finite dimension. We study the effect of correlations and criticality in the definition of this effective thermal state and discuss the possible implications for the classical simulation of thermal quantum systems.
URIhttp://hdl.handle.net/2117/78929
ISSN1367-2630
Publisher versionhttp://iopscience.iop.org/article/10.1088/1367-2630/17/8/085007/meta;jsessionid=984D9B4BFFFDCD850C368299784576CC.c1